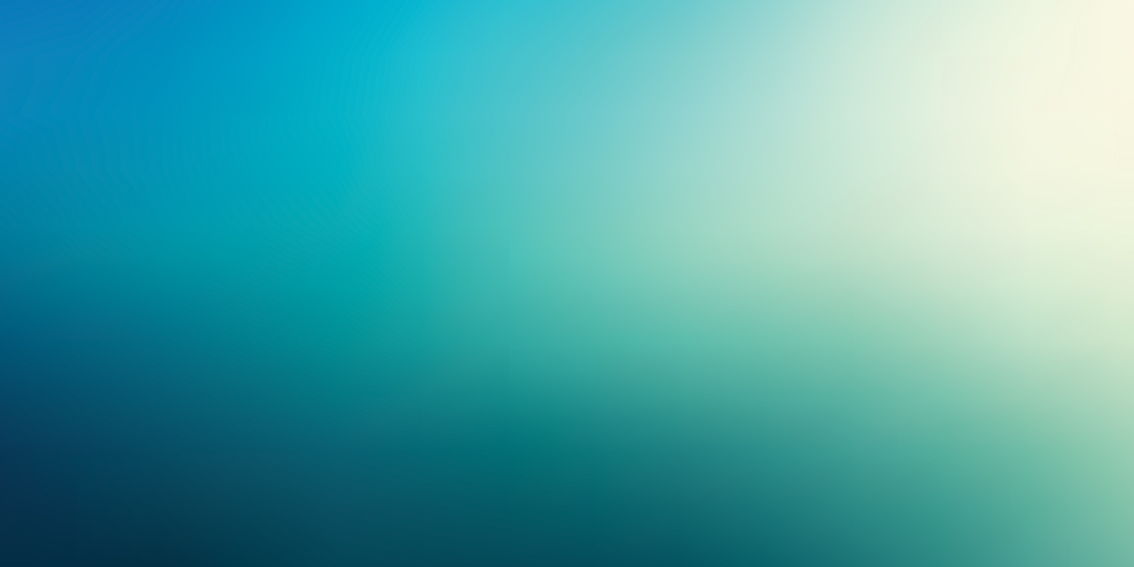 WHAT HAPPENS WHEN YOU RESEARCH A 2,500 YEAR OLD PYTHAGOREAN THEORY?

When Times Square Arts organization decided to honor New York’s essential workers, especially healthcare workers, the result was a series of groundbreaking cymatics videos broadcast in Times Square. In a collaboration between CymaScope.com and an artist collective known as Gathering of Noetic Generation (G.O.N.G.), a heartfelt piece of poetry was made visible by CymaScope instrument and displayed on Times Square giant screens. 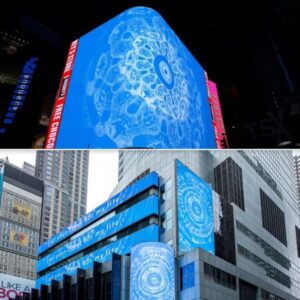 In a seamless blend of art and science the poetry was made visible by imprinting the spoken words onto pure water in the CymaScope instrument, resulting in a visually dramatic and beautiful message that reflects how each one of us, individually and collectively as a society, are deeply indebted for the sacrifices being made by those on the frontlines, as well as recognition of those enduring painful loss at this time. As one of the world’s busiest pedestrian areas, Times Square epitomizes the city that never sleeps, and the cymatic poetry displays a beacon of love, by day and by night, at this unique moment in history.

John Stuart Reid, director of the CymaScope laboratory said, “The CymaScope team is honored to have been invited to assist in collaborating with Times Square Arts and the G.O.N.G. team of artists in creating this groundbreaking artwork, the first time in history that poetry has been made visible cymatically and the first time that cymatics imagery has been displayed in Times Square. This technique paves the way for the study of languages via their cymatic forms, and Professor Lila Pine of Ryerson University is already beginning to use a CymaScope instrument to make visible First Nation languages, to help raise awareness of this important aspect of North Americann heritage.” James Stuart Reid, who heads the CymaScope Lab2 facility, said, “The opportunity to make visible, English as well as Spanish, Russian, Chinese and Creole languages was an historic first and a genuine privilege. I was honoured to be part of such a wonderful collaboration”.

A new study published in the Water Journal describes a novel method for comparing the sounds of cancer cells and healthy cells. The method may lead to the development of an Artificial Intelligence–supported surgical procedure for the removal of tumors. A form of the technology also holds promise for early cancer detection.

The discovery that cells create sound, as a feature of their natural metabolic function, was made by Professor James Gimzewski of UCLA, in 2002. Using an Atomic Force Microscope, he and his colleague, Dr. Andrew Pelling, were able to listen to the sounds of cells for the first time and, surprisingly, they found that the sounds lie in the audible range. In other words, if our ears were sensitive enough we would be able to hear the sounds of our own cells. (Perhaps it is fortunate that we cannot.) Professor Gimzewski named their new approach to cell biology, “sonocytology,” combining “sono” (sound) with ”cytology’” (the

study of cells). In Dr. Pelling’s article “The Singing Cell”1 he says, “Observing cells in different situations, [for example] cells under stress, generates different sounds. In fact the state of the cell, if it is healthy or cancerous, can be distinguished by listening to its sound. In future we hope to bring our research in sonocytology to the point at which it can be integrated in medical disciplines such as cancer research. Listening to cells would allow a fast diagnosis of cancer without the use of drugs or surgery. Sonocytology might also make cancer detection possible before a tumor forms.” 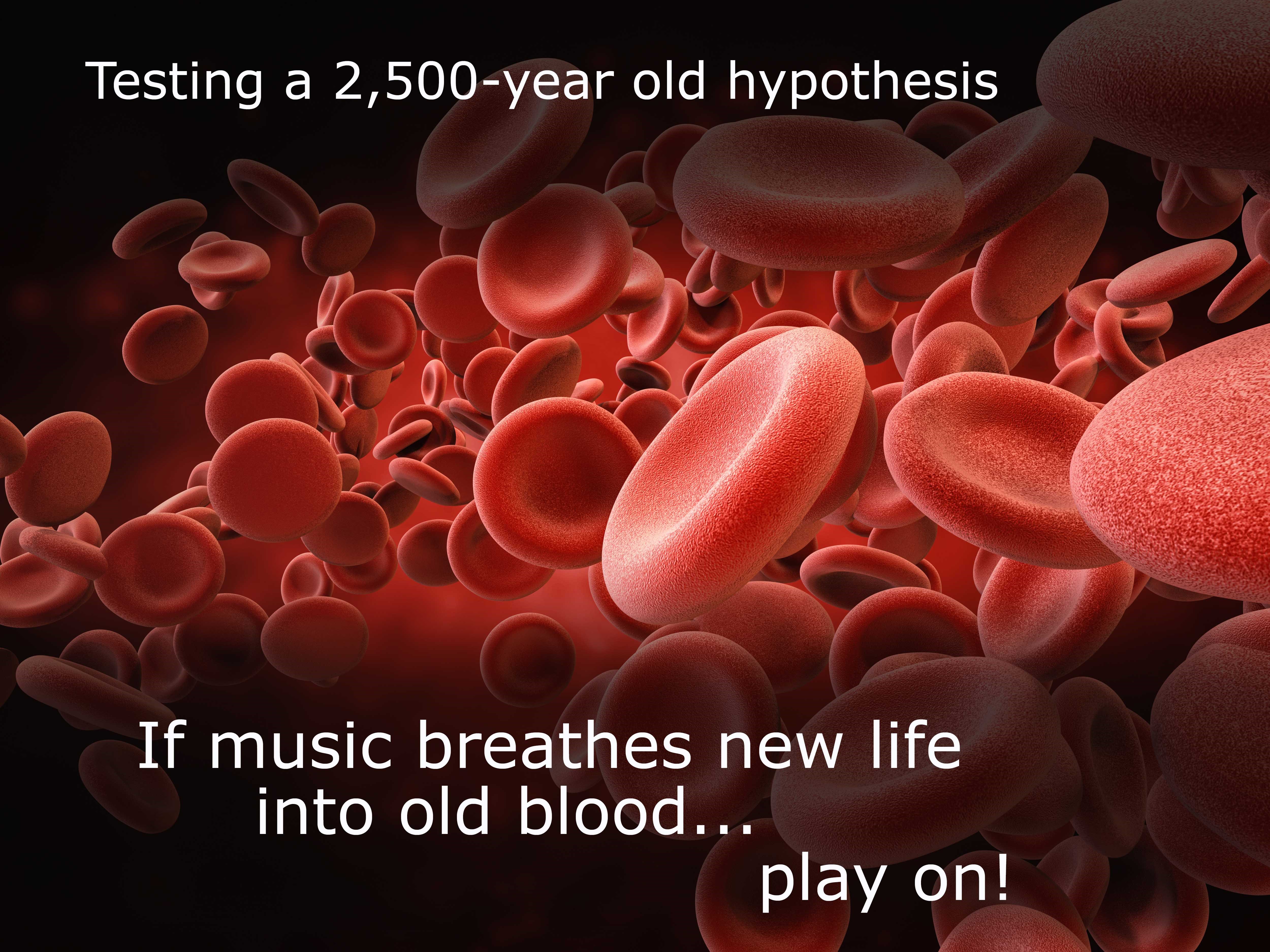 In June of 2019 we shared with our readers the result of the initial phase of research conducted by John Stuart Reid and Professor Sungchul Ji on the effect of various sound samples on human red blood cells. (see article below) The preliminary findings were certainly exciting—but wait till you read what happened next…

The follow-up to the initial phase of research conducted by John Stuart Reid and consultant, Professor Sungchul Ji revealed an astounding result!

The experiment consisted of immersing human red blood (type O+) cell samples in specific sounds for twenty minutes.  Immediately following the 20-minute test period, the blood from each vial was diluted in a ratio of 200:1 with a buffer solution of pH 7.41, followed by pipettor mixing with Trypan blue stain, and a cell counting via an automatic cell counter.

The whole blood was stored in vials in laboratory refrigeration at 4 degrees C. Each vial was brought to ambient temperature.

One vial of the same blood sample was placed in the laboratory music incubator while the other was placed in the very quiet environment of the Faraday Cage. The findings from the tone generated by the AMI—Acoustic Meridian Intelligence device by Cyma Technologies were the most remarkable!

The hypothesis is that the cell membrane can regain its integrity as a result of immersion in certain frequencies. While many of the other musical selections (piano, guitar, gong, chanting, singing, etc) in the experiment generated an increase in the number of cells in a specific sample, no other “sound selections” had the same overwhelmingly positive response. The “cell regeneration” frequency proved to net the greatest number of viable red blood cells in a simple twenty-minute application.

Admittedly, the investigation on the topic of the positive effects of sound on human blood cells is in its early stages. But, the results of this introductory research provided enough exciting evidence to suggest that some form of sound could potentially be used in a healing process for the body.

When asked what aspect of the research would be looked at next, Reid explained that one of the next steps would be to do the same experiments in vivo–meaning testing the blood in the body of a healthy human being with the same immersion in sound applications. Since the publication of his findings, he reports that several other potential research partners have expressed an interest in the continued exploration of this fascinating topic and realm of possibilities.

We are all subjected to many sounds each day in our environment. It could be very important to know the effects of these sounds on our cells to help us understand the potential causes of disease and also the prevention of it. Finding out if specific therapeutic sounds could be utilized in creating cell regeneration could prove to be invaluable in many areas of medicine.

In the meantime, if you are an owner of an AMI 750, you will be delighted to know that “cell regeneration” is a component of every great “sound recipe” in the ten channels of this Cyma Technologies device. It is exciting to know that we are on the cutting edge of developments in the therapeutic sound arena!

See the experiment details at:  https://experiment.com/u/8qj2Mw

WHAT HAPPENS WHEN YOU RESEARCH A 2,500 YEAR OLD PYTHAGOREAN THEORY?

In December 2017, an exciting project began with far-reaching implications for the sound healing community…

New research by Professor Sungchul Ji of Rutgers University and acoustics physics researcher, John Stuart Reid was conducted in his laboratory in the United Kingdom. Much “initial phase” work was involved in creating a protocol for the experiment using human red blood cells, to show the extent to which the life of the cell can be influenced by music.

The first experiment involved exposing the cells to classical music in an incubator for twenty minutes, while a control vial was placed in a quiet environment in the lab’s Faraday Cage* (an enclosure used to block electromagnetic fields during scientific experimentation) for the same time period. The results were significantly positive in favor of the influence of music on the red blood cell count. The cell grouping which had been exposed to music was significantly higher in numbers! Many more experiments will be needed and are anticipated to show the impact of sound on human cells. Excitedly, this first one has increased great interest in future findings. 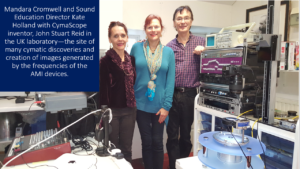 Pictured are Mandara Cromwell and Sound Education Director Kate Holland with John Stuart Reid in the UK laboratory, which has been the site of many cymatic discoveries and creation of images generated by the frequencies of the AMI devices.

John and Professor Ji are continuing the next phase of their research which will certainly include many forms of healing sound.

We anxiously await the next great cymatic news!

*The Faraday Cage is named after one of the first experimenters interested in the nature of vibration –Michael Faraday. In 1831, he performed an experiment with sand and water on a glass plate to gain insights into the effect of vibration on matter.

One of the first images revealed was in the shape of a star. (Readers can view the same phenomenon in The Soundflower Experience™ Three and also the short film entitled, “Rapture” available on this website.) Click here to see these offerings in our SHOP